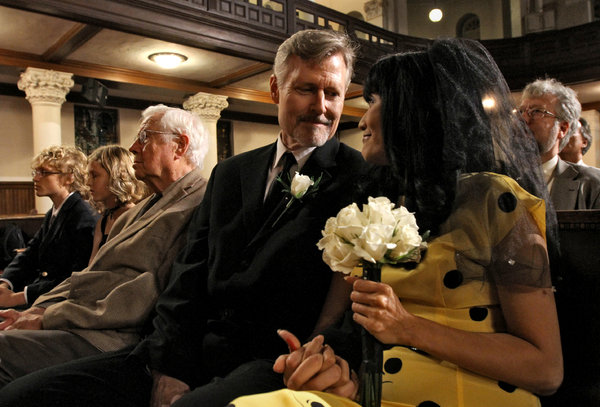 The bride and groom in church with the groom’s father, Neal; daughter, Liv; and son, Noah.

Jay Nickerson spent 20 years listening to a friend, the comedian and actress Suzanne Whang, talk about her relationships, silently thinking that she could do so much better than this guy, whoever the guy happened to be at the time. During those conversations, Mr. Nickerson, an actor turned special-education teacher, kept pushing away the nagging feeling that maybe he was the right guy.

(Read more via For Better and for Worse, Long Before the Wedding – NYTimes.com)

Heart! We will forget him!
You and I — tonight!
You may forget the warmth he gave —
I will forget the light!When you have done, pray tell me
That I may straight begin!
Haste! lest while you’re lagging
I remember him!

The three witches from Macbeth. Shakespeare would be proud. Everything evolves.

-via I Love Vampire Novels

How To Write A Romance Novel (by 8novels)

“Russell Blake writes with a brisk intensity and pulse-pounding power. Jump in and hang on for a nonstop thrill ride.” – Scott Nicholson, Liquid Fear

Artemus Black. Perennially down-on-his-luck Hollywood PI whose Bogie fixation is as dated as his wardrobe. With an assistant who mocks him relentlessly, an obese cat that loathes him, a romantic life that’s deader than Elvis, money problems, booze, nicotine, and anger management issues, how much worse can it get? When he takes a case that’s supposed to be easy money working for a celebrity whose colleagues and surrounding paparazzi are dropping faster than interest in the star’s big comeback, the cakewalk turns ugly and Black finds himself in a web of deceit, betrayal, and murder – and bad hair days.

To err is human, but to sweep it under the rug is completely corporate.

With so much talk in recent news about the poor quality of indie authors’ works and data that shows that only about 59% of self-published authors go so far as to pay a professional editor before hitting that publish button, it’s easy to forget that the traditional publishing industry has its fair share of mistakes, too…

But now, the highly anticipated release of a sequel in the Bridget Jones Diary series, Bridget Jones: Mad About the Boy, has not only an error…it contains about forty pages of a different, unpublished book somewhere in the middle of it.

(via goodereader.com: Lack of Editing Is Only for Self-Published Authors? Think Again.)

The eight-episode first season of “The Paradise” was shown on the BBC a year ago and arrives here Sunday night (on PBS’s “Masterpiece Classic”) feeling like a straggler. It’s the last of the big-four British costume dramas of recent years to make its American public-television debut, after “Downton Abbey,” “Call the Midwife” and “Mr. Selfridge,” and it’s the most frivolous of the bunch, which is saying quite a bit. (It’s based, incongruously enough, on a novel by the great French naturalist Émile Zola.)

(via ‘The Paradise,’ a British Period Drama, Comes to PBS – NYTimes.com)