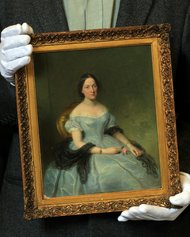 Matt Cardy/Getty Images A portrait of Mary Shelley from the collection of Oxford’s Bodleian Library.
By JENNIFER SCHUESSLER

Mary Shelley’s “Frankenstein,” famously conceived during a waking dream in the stormy summer of 1816, has inspired countless plays, movies, comic books, even iPhone apps. And now, the original manuscript is also the centerpiece of the first phase of the online Shelley-Godwin Archive, an ambitious digital project that goes live on Halloween.

The archive, whose opening will be celebrated at a public event on Thursday evening at the New York Public Library, is a collaboration between the library and the University of Maryland’s Institute for Technology in the Humanities, with contributions from Oxford’s Bodleian Library and several other institutions. Its goal is to eventually bring together all the known literary manuscripts of Percy Bysshe Shelley and Mary Shelley, his second wife, as well as Mary’s parents, Mary Wollstonecraft and William Godwin — the “first family of English literature,” as the archive puts it.