CAN WE TALK ABOUT THE PICTURE OF DORYAN GOSLING THOUGH

From Pulp! The Classics 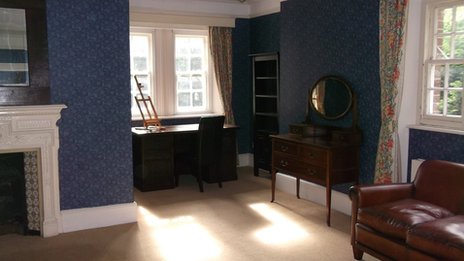 Thomas Hardy died in the room, which had been kept private because it was still lived in

The room where Thomas Hardy finished writing The Mayor of Casterbridge has opened to the public.

The study-turned-bedroom at Max Gate in Dorchester, where the author died, was kept private when the National Trust opened the house to the public in 2011.

Visitors can now see the room and a master bedroom alongside the six other rooms at the Dorset writer’s home.

When he takes hold of her hand…!

The Danish fimmaker Thomas Vinterberg is in talks with the British production company DNA to direct a new version ofThomas Hardy’s 1874 “Far From the Madding Crowd,” his fourth novel and his first major success. According to The Wrap, Carey Mulligan is apparently being sought for the lead role of Bathsheba Everdene, played by Julie Christie in John Schlesinger’s 1967 version.

The script will be written by David Nicholls, who wrote the 2008 BBC adaptation of Hardy’s “Tess of the d’Urbervilles” and the upcoming Mike Newell film of “Great Expectations.”

Vinterberg is best known as co-founder withLars Von Trier of the Dogme 95 movement and for directing 1998’s “The Celebration” (“Festen”), the first film made according to its ascetic rules. His subsequent movies, including the English-language sci-fi romance “It’s All About Love” (2003) and the Von Trier-scripted “Dear Wendy” (2005), have been less well received. His latest, “The Hunt,” about a kindergarten assistant accused of being a pedophile, met with a mixed response when it was screened at Cannes this year but earnedMads Mikkelsen the festival’s Best Actor prize.

“Far From the Madding Crowd” is about the attraction of the vain and proud (but inherently virtuous) independent farmer Bathsheba for three men in a fictitious county like Dorset, in Hardy’s mythical Wessex. For the abusive and reckless Sergeant Troy and the prosperous older farmer William Boldwood, her allure proves tragic.

Her most steadfast advocate and her soulmate is the shepherd Gabriel Oak, who becomes her second husband after Troy. Although “Far From the Madding Crowd” is a romantic tragedy, it is less fatalistic and more optimistic in tone than “Tess,” “Jude the Obscure,” or “The Mayor of Casterbridge.”

Schlesinger’s film, which combined elements of British plein air realism with Hollywood glossiness, was a hit in Britain and a failure in America. Christie’s status as a Swinging Sixties icon (initiated in Schlesinger’s “Billy Liar’) made her a less than popular choice as “the headstrong maid” Bathsheba, but she acquitted herself well alongside Alan Bates (Gabriel),Terence Stamp (swashbuckling as Troy), and Peter Finch (Boldwood).

Bates pressed his claim to be the Hardy actor of his generation with his flamboyant portrayal of Michael Henchard in Dennis Potter’s 1978 “The Mayor of Casterbridge” miniseries. One critic described his performance as “Long John Silver without the parrot.”

“Far From the Madding Crowd” was first filmed in 1909. The 1915 version directed byLawrence Trimble starred America’s most populsr actress, the “Vitagraph Girl” Florence Turner; they made it in Britain where they were working at the time. The most recent version, a Granada Television miniseries which starred Paloma Baeza and aired on Masterpiece Theatre in 1998, is not regarded as a classic.

Thomas Hardy goes to the opera | Culture | The Guardian

Two things I love: Opera and Thomas Hardy (not to be confused with actor Tom Hardy, whom I also love).

Ella Marchmill is on holiday with her husband, William, and their three children at a seaside resort. William is a gunmaker. (We dislike him already, as Hardy intended.) The house where they’re staying has two rooms reserved, says their landlady, for a young poet: “… a different sort of young man from most – dreamy, solitary, rather melancholy …”

Rufus Sewell and Emily Woof in The Woodlanders (1997).